The Kramer Assault 220 has the classic Les Paul look but with some great features that make it a must have guitar.

The Kramer Assault 220 is a guitar with a classic feel but some great contemporary features that make it a must have if you like your rock and metal.  We first featured this guitar on our sister site RateGuitars.com and it barely registered a whimper and when it did it got a low user rating.  So to get it out there and to see what you think we have posted our original review here with our original ratings.

Kramer, certainly in the 80s, produced guitars that were must have instruments if you liked your guitar playing hard and fast.  They were high spec guitars with great features that made them the natural choice for some of the biggest names in rock music.  Kramer started out in the 1970s producing guitars with aluminium necks.  However, in 1982 the company signed an exclusive agreement with Floyd Rose which instantly meant that they were the must have guitar if you were a guitarist who liked your whammy bar antics.  Add into the mix high spec additions such as Seymour Duncan pickups and Schaller locking tuners and you can see why Kramer gained endorsements from the likes of Eddie Van Halen.

This brings us nicely to the Kramer Assault 220 a guitar with all the features that you would expect from Kramer but at a decent price.

The Kramer Assault 220 is a great looking Les Paul style guitar.  However, the major drawback of the Gibson Les Paul, for many guitarists, is the fact that it has a fixed bridge.  With the Kramer Assualt 220,  if you are looking for the classic look of a Les Paul but you don’t want a fixed bridge guitar then, the addition of the Floyd Rose style locking tremolo is a real bonus.

The Kramer Assault 220 is cut from mahogany and is as you would expect a Les Paul style shape with a single cutaway to allow access to the upper frets.  The set mahogany neck has and has a thin tapered profile which makes it easier to play than the standard Les Paul neck.  It is topped with a rosewood 24 fret fingerboard with some nice looking thorn shaped inlays.  The guitar we looked at was alpine white and looked great with good attention to detail in terms of the build quality. 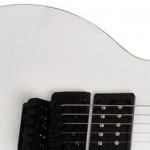 In terms of electrics the Kramer Assault 220 comes armed with two Alnico V humbucking pick-ups which can be selected through a 3 way selector switch.  There is a master volume control which features the Kramer “treble bleed” that keeps your tone bright as you drop the volume.  There is also a master tone control which is enabled for push/pull coil splitting allowing you to turn the humbuckers into single coils for additional tonal functionality.  All in all this is a pretty high spec guitar which has all the features to keep even the most fussy guitarist happy.

Plugged in the Kramer Assault 220 performs well.  There is a little bit of fret buzz but generally not too much of an issue.  The pick-ups sound good both clean and distorted and the coil splitting adds an extra dimension.  This is certainly a rock guitar with a nice growl from the neck pick-up when the distortion is turned up.  The bridge pick-up also has a nice crisp tone when pushed on the distortion front.  The only criticism of the pick-ups is that the tone can get a bit muddy at a higher volume but then you can perhaps expect that given the price of the guitar.

Generally this is a really nice guitar.  The price point is good for what is a reasonably high spec guitar but Kramer have saved money by having it built in Indonesia.  Now some might say this leads to a lower quality of workmanship.  However, I would have to disagree the build quality was good and this is a very nice guitar to play.  Generally this guitar gets a big thumbs up from me.  So if you are looking for a classic Les Paul style guitar with a Floyd Rose locking tremolo at a reasonable price then the Kramer Assault 220 is the guitar for you.